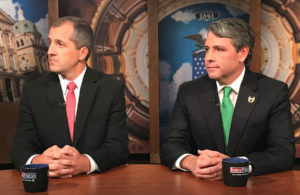 The two major party candidates for state ag secretary say preserving Iowa’s soil and cleaning up the state’s lakes and streams are an important mission for the State of Iowa, but they differ on a proposal that’s been around nearly eight years to raise more money for that mission.

Tim Gannon, the Democrat who’s running to be Iowa’s next ag secretary, supports raising the state sales tax by a fraction to finance the effort.

“We are an agricultural state because we had the fortune to be settled on top of the best soil in the entire world and we’ll only be an agricultural state as long as we care for that resource,” Gannon said Friday. “And so I think that putting the three-eighths cent sales tax into place, giving us that large funding stream into conservation, helps make things much more dynamic and helps us make progress much faster.”

Mike Naig, the Republican who’s been ag secretary since March, is seeking a full, four-year term. Naig is a proponent of this year’s legislation that reallocated already existing taxes to water quality initiatives.

“It puts us on a different trajectory,” Naig said Friday. “…I’m very comfortable where that has gotten us. As I said at the bill signing, this is not the last converastion that we will have about water quality funding in this state, so I would never rule out a funding source in the future, but it’s got to come with a larger package around it in order to be considered.”

Naig indicated he’d only support raising the sales tax if it’s part of a broader package of tax cuts. Naig and Gannon made their comments this weekend on Iowa Public Television’s “Iowa Press” program.

Iowa voters passed an amendment in 2010 that created a state Natural Resources and Outdoor Recreation Fund, financed with a three-eights-cent increase in the state sales tax — if the Iowa legislature and governor passed a sales tax increase.