You are here: Home / News / Traveling exhibit on prohibition to open this weekend at State Historical Museum 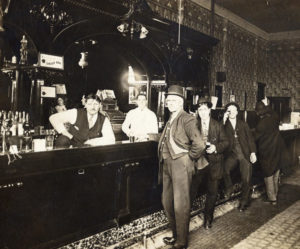 You can buy alcohol at thousands of places from a convenience store to craft breweries now in Iowa, but there was a time when you couldn’t legally buy a drink in this or any other state.

Iowa Department of Cultural Affairs spokesman Michael Morain says they are preparing an exhibit for the State Historical Museum that chronicles the prohibition era from 1920 to 1933. “It’s a traveling exhibit from the National Endowment for the Humanities and it was originally organized a couple of years ago at the National Constitution Center in Philadelphia,” Morain says. “It arrived just a few days ago in 23 crates of artifacts that tell the story.”

The exhibit called “Spirited: Prohibition in America,” opens September 1st. “Because it is here in Iowa, we are supplementing the exhibit with some of the Iowa story. So, a corner of the exhibit will have some Iowa artifacts about some stories — like Templeton — that most of us know well by now,” Morain says. “but also, some interesting footnotes to the story and how it played out here in Iowa.”

Morain says to drink or not to drink was a question that got a lot of discussion in our state. “For the first century of Iowa’s statehood the topic of alcohol and prohibition was really one of the defining topics of our state politics,” according to Morain. “So, even from territorial days there were two camps — they called them the wets and the dries — and people lined up on either side of that divide.” Morain says some of the immigrant groups in the state were the most vocal against prohibition.

“Especially German immigrants…beer was just a part of life back in the old world and they brought those customs with them. So, especially new German immigrants didn’t understand what all the hub-bub was about,” Morain explains. The different opinions on alcohol didn’t ease up even after the18th Amendment to the U.S. Constitution was repealed and prohibition died.

“For 20 years after prohibition, even 30 years after prohibition, the hot topic was liquor by the drink. Where you couldn’t go to a bar and just order a cocktail You could order beer or wine, but not hard liquor,” Morain says. He says this exhibit gives a better insight into prohibition and the fight against alcohol that is more detailed than the movies that show things like Elliott Ness and gangsters battling it out.

“We have an image of what the 20’s look like — but sometimes the real stories are even more interesting and even more fascinating than Hollywood’s version,” he says. The Iowa Alcoholic Beverage Division is a partner for this traveling exhibition and is promoting it with graphics on a semi that will log thousands of miles traveling throughout Iowa in the coming months delivering alcohol. There will also be some special programming to go along with the exhibit.

Find out more on the Iowa Department of Cultural Affairs website at: iowaculture.gov.