You are here: Home / Crime / Courts / Most of money donated for Mollie Tibbets reward fund will be returned 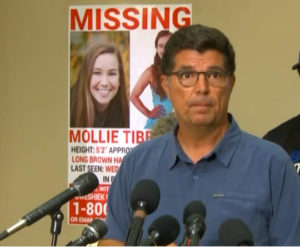 Rob Tibbetts talks at the announcement of the reward fund earlier this month.

Most of the money given to a reward fund in the Mollie Tibbetts case will be returned to donors.

A statement from Crime Stoppers of Central Iowa says no reward will be paid to anyone who provided tips because Tibbetts was not safely returned home. The reward fund grew to over $385,000 in the weeks after the 20-year-old Tibbetts went missing from her hometown of Brooklyn.

Many donors specified that their contribution be returned if Tibbetts wasn’t found safe, while other donations will be transferred to Crime Stopper’s general fund or given the Tibbetts family.

Tibbetts disappeared on July 18th. Authorities who arrested the man for her murder last week said he led investigators to Tibbetts’ body in a cornfield southeast of Brooklyn. The state medical examiner ruled Tibbetts’ death a homicide from “multimple sharp force injuries.” Twenty-four-year-old Cristhian Rivera is charged with first-degree murder.

“All of us at Crime Stoppers of Central Iowa are saddened by the tragic loss of Mollie Tibbetts. Crime Stoppers set up a reward fund for the safe return of Mollie Tibbetts. The bulk of the contributions to the fund from individuals and businesses were conditioned upon meeting the condition of Mollie’s safe return. Because this condition was not met, those monies will be returned to all contributors who specified they wanted their contribution returned. Certain individuals did not request the return of their donation and those monies will be disbursed in accordance with the Donation Agreement Form to the Crime Stoppers General Fund and/or the Mollie Tibbetts family. No reward will be paid to any individual providing information in Mollie’s case as the condition for Mollie’s safe return was not met. Crime Stoppers wishes to thank all of the many individuals and businesses who responded so quickly to give to the fund. Your kindness and compassion is greatly appreciated.