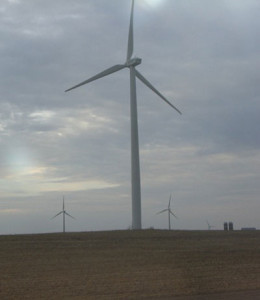 Invenergy says the projects will include more than 80 turbines each in Sac and Ida counties. Nick Matchin, Invenergy’s manager for renewable development, says the locations have easy access to the electrical grid and the area’s stronger winds make it more conducive to wind farms.

“It’s simply windier,” Matchin says. “If you’re standing on average in western Iowa, you’re going to find it tends to be windier out. It’s relatively flat compared to other areas of the state.” Both wind farms are designed to generate at least 200 megawatts of power.

The company already operates facilities generating about 1,500 megawatts of wind energy in the state. Both projects are on track for construction next year. It’s the first project the company has launched in Sac County and it’s second in Ida County.

Matchin says they’ve found a lot of willing participants in the region. Matchin says, “There was still plenty of interest there to be able to put a second project in the county and along with the transmission that goes through it as well as the great wind resource.” The plans call for a wind farm with 85 turbines in Sac County and 81 turbines in Ida County.

The projects could be up and running by the end of 2019 or early 2020. Invenergy also has plans to develop a project in eastern Iowa.