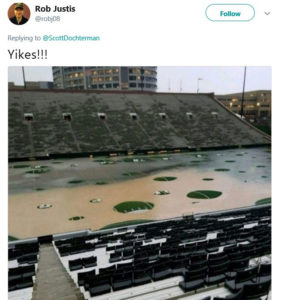 This picture was tweeted out of the swamped Kinnick Stadium turf.

As many as three tornadoes touched down in eastern Iowa during last night’s severe thunderstorms.

Survey teams are being dispatched this morning to look over the damage and talk with first responders and other witnesses. Meteorologist Tim Gross, with the National Weather Service in Davenport, says there were three tornado warnings issued during the storm.

“There was a tornado warning southwest of Williamsburg in Iowa County and there was another one for the Iowa City metro about 6:15,” Gross says. “There was another one for De Witt in Clinton County.” The strongest wind gusts reported during the storm reached 83 miles an hour at the Iowa City Municipal Airport. No injuries are reported from the severe weather, as yet, but there’s widespread damage to trees and utility poles.

“On the southeast portions of Iowa City, there was 60 to 80-mile-an-hour winds,” Gross says. “As a result, there were a lot of downed power lines and trees and power outages in Iowa City and the Quad Cities. The Quad Cities had more like 50 to 60-mile an hour winds.” As many as 5,000 homes and businesses lost power in Iowa City during the height of the storm, while another two- to-three-thousand homes were dark in the Quad Cities area.

Kinnick Stadium was struck by flash flooding, causing giant bubbles of artificial turf to rise up in the brown water, though University of Iowa officials say the football field will be ready for Saturday’s season opener. The far southeastern corner of Iowa also got drenched.

“We had one storm spotter call us with 5.1 inches of rain in extreme northwest Des Moines County,” Gross says. “Lee County, the Keokuk area, had a lot of tree damage as well and the Keokuk Lock and Dam on the Mississippi River reported 4.9 inches of rainfall.” A rainfall record was set in the Quad Cities on Tuesday with 3.31 inches, breaking the previous longtime record of 2.7 inches that was set in 1872.