A retired farmer and long-time legislator who served three terms as Iowa’s Secretary of Agriculture has died.

Dale Cochran farmed in Webster County, near the community of Vincent, for four decades. Cochan was first elected as Iowa’s Secretary of Agriculture in 1986. He continued in office until he decided not to seek re-election in 1998. 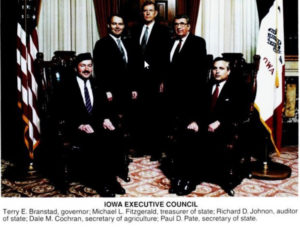 Secretary of State Paul Pate tweeted this photo as he offered condolences on Cochran’s death.

in the Iowa House, and three daughters. One of his son-in-laws is a current member of the legislature.

Cochran died Tuesday at the age of 89. His funeral will be held Friday in Des Moines and he’ll be buried in Fort Dodge at the North Lawn Cemetery. The family has asked that memorial contributions in Cochran’s honor be made to the Iowa Capitol Monument Conservation Fund or to the hospice organization that provided him end-of-life care.