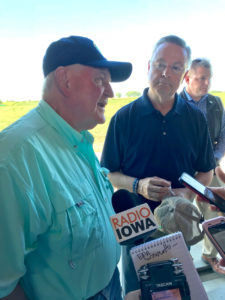 “I’m really proud of our agricultural community,” Perdue said late this afternoon. “They’ve stood with the president. It’s been painful. They’ve seen the prices drop on hogs and soybeans and other crops, but they understood he’s doing it for the right reason. China has cheated and farmers don’t like cheating.”

Perdue visited the Farm Progress Show in Boone today, then headed to a farm near Melbourne for a town hall meeting with Republican Congressman Rod Blum and a few dozen Iowa farmers.

“Secretary Perdue understands what you’re saying,” Blum said. “He knows that we’re nervous out here about trade and tariffs, right? And he understands ethanol. He understands that we need E15.”

Perdue told the crowd the president is an ethanol backer and the ag secretary indicated there is “momentum” for trade deals with Mexico, Canada and Japan.

“The president has gotten the leverage. He’s gotten their attention and, like a lot of people here in the United States, they’re not quite sure what he’s going to do next,” Perdue said, “so to some degree we’re using that leverage in negotiation to get that done and then I’m hoping we can move on with the EU and then I think China will finally recognize that they need to come along in that way.”

Perdue acknowledged farmers are uneasy, but likened the trade situation to a weight loss program that’s “kind of painful when you’re going through it, but at the end you’re healthier.”

Representatives of pork producers and dairy farmers raised concerns about how the USDA has calculated the federal payments meant to off-set losses due to the trade war. Perdue said his agency calculated “tariff damage” in a way that could be defended if the payments are challenged to the World Trade Organization.

“Everybody would want more. I understand that, but the program’s pretty well set,” Perdue said of the $12 billion payout that’s planned.

Perdue later told reporters he is optimistic the trade impasse with Canada can be resolved yet this week, so a re-negotiated trade deal with Mexico and Canada can be presented to congress soon.

On Thursday morning, the U-S ag secretary will join Republican Governor Kim Reynolds and Republican Mike Naig, the state ag secretary, for an event with farmers at an Ames co-op, then Perdue will travel to rural Panora to tour conservation sites with Republican Congressman David Young.

“Instead of holding events with Republicans nervous about their re-election campaigns, and talking about bailout packages, everyone should be hard at work coming up with solutions to the pain caused by bad biofuels policy and bad trade policy,” Gannon said.