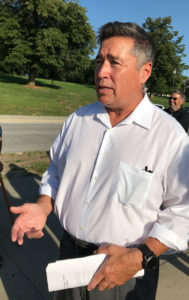 A leader in the state’s Latino community says it’s time for leaders in Iowa’s white majority to defend Latinos being targeted by a “disturbing” robocall that cites the murder of Mollie Tibbetts and calls for the deportation of 58 million “brown” immigrants.

“As long as we can get the people to support us, the overall community, we can stop the hate,” Joe Henry of Des Moines, a regional vice president of the League of United Latin American Citizens (LULAC) said early this evening.

Hery was among a group that gathered outside the statehouse tonight.

“If we can stop this right now, if people will be speaking up, if good people will do the right thing — from local officials to people at their churches — then we can stop this hateful type of behavior,” Henry said, “but we have to do it now before it gets any bigger.”

Here’s how the call ends: “Re-found America as whites only and get rid of them now. Every last one.”

The message begins by referring to the man accused of murdering Mollie Tibbetts as a “savage intruder” and criticizes members of Tibbetts’ family for saying they do not blame a race of people for her murder. 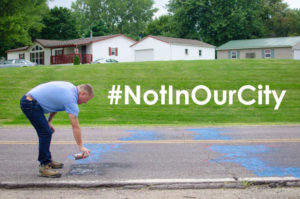 The city of Des Moines tweeted out this photo.

Authorities in Des Moines blocked off a city street after the words “Deport Illegals” were spray painted across both lanes of the road today.

The graffiti was painted in a neighborhood where many Latinos live. It was wiped away within two hours after it was reported and the City of Des Moines posted this message on its Twitter account: “#NotInOurCity.”