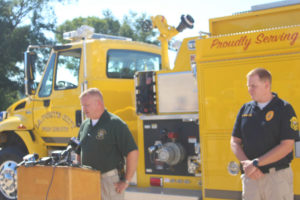 La Porte City Police Chief Chris Brecher met the media again Wednesday and confirmed the remains found along Wolf Creek are the missing teen they have been trying to find for weeks.

“We have been able to positively identify these remains as those of Jake Wilson,” Brecher says. The 16-year-old autistic teen went missing in April after taking a walk to the creek that was near his home. Brecher says the testing continues the remains.

“There is further analysis currently in progress and we hope that these will provide more definitive answers to the questions we all seek,” Brecher says. He says the cause and manner of Wilson’s death is still undetermined.

“We can’t comment to that at this time. It still is an ongoing investigation. There’re things that aren’t complete yet. We hope with continued analysis, we hope to at some point get that answer,” Brecher says. Brecher says the constantly changing conditions in the creek made it tough and that is probably why it took so long to find the remains.

Black Hawk County Sheriff Tony Thompson says they are glad to be able to bring one part of the investigation to a close. “We’ve done all that we can to bring Jake home,” Thompson says, “and I think at this point that big weight is a little bit off of us slow, now we’ll start working the slow and methodical pieces of how we put the rest of this investigation together. We may never have those answers — and that’s a frustration that we are going to have to deal with every time we look the family in the eye.” 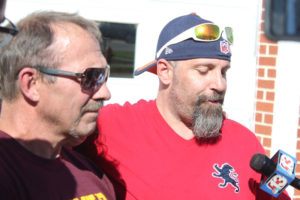 Jake’s grandfather Bruce Wilson talked with the media after the announcement of the testing results. “You know we are at peace, we’re at peace. And it’s always going to be rough for a long time, forever maybe. Some day we’ll have the answers, we know that,” Wilson says. He says they are happy to know the remains are Jake and it provides closure for them.

“I am glad they are going to continue and keep their eyes open — but at this point we are going to lay Jake’s memory to rest and in a good light — because he was a good man,” Wilson says.

Mike Wilson, Jake’s father, also talked with the media. “Finally got closure, Jakes at peace, he’s in heaven, no more suffering for him at all. He’s not suffering, he’s with God, God’s taking care of him., he’s looking down, probably joking around saying ‘dad I wish I could go fishing with you again,'” Wilson says.

The family says a service of remembrance for Jake has been set for October 7th at 2 p-m at the Union High School gymnasium.