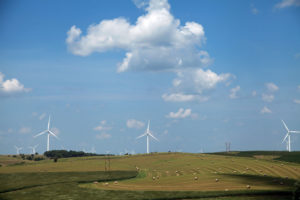 MidAmerican Energy Company has filed a plan with the U.S. Fish and Wildlife Service on how it will try to minimize the number of eagles and bats which are killed by its wind turbines across the state.

MidAmerican spokesman, Geoff Greenwood, says began studying the issue back in 2014 along with federal officials and the Iowa DNR. “It really shed some light on the population and is giving us some ideas and informs us how we can minimize the number of eagle and bat deaths that occur near wind turbines,” Greenwood says.

Iowa used to have much smaller windmills in the state that were used for pumping water, but in the last couple of decades thousands of giant wind turbines have sprouted across the state as an alternative fuel source. Greenwood says MidAmerican now operates more than 2,100 turbines on 27 wind farms across Iowa.

MidAmerican Energy generated about 50 percent of its Iowa customers’ annual use in energy through the turbines and plans to expand it to 100 percent by the end of 2021. “Wind energy is clean energy — its emissions free — but all forms of energy generation can have some kind of impact on the environment and on wildlife. And these are creatures that are flying in the air, and these turbines are high in the air. So, it is something that does occur and we are doing what we can to minimize those occurrences,” according to Greenwood.

The studies showed wind turbines impact four species of bats: the Indiana, northern long-eared, little brown and tri-colored bats.  The company says it has spent $15 million studying the issue. Greenwood says they believe the can cut the death of bats by adjusting the times when the wind is strong enough to make the blades of the turbines start spinning.

“We plan to modify the turbines activity so they stop during certain times of the year if it is under that threshold speed where it begins to generate energy,” Greenwood says. “And we hope that that will be a significant impact in reducing the number of bats that come into contact with our turbines.”

Bats are nocturnal, so the adjustments would be during the nighttime hours and other times identified when the bats are flying more often. When it comes to eagles, one of the measures would educate nearby residents the importance of not putting out food sources that could cause the birds to fly into the path of the turbines.

“What we found is that in some cases there are people who will put animal remains on the ground to attract bald eagles,” Greenwood explains. “And we plan to educate people that that is not something that you should do. You are attracting bald eagles into the path of a wind turbine, and that can put the bald eagle into danger.”

MidAmerican Energy also proposes to establish a $4.4 million bat conservation fund and a $1.6 million  eagle conservation fund to support statewide mitigation projects to offset any impacts to those species. The company seeks a 30-year U.S. government permit to allow for an average of 10 turbine-related incidental bald eagle “takes” – or deaths – each year across its Iowa service territory. The company says that number would account for less than a half percent of the eagle population that could be affected by MidAmerican Energy wind farms.

“We’ve submitted the plan to the U.S. Fish and Wildlife Service. The U.S. Fish and Wildlife Service will have a public comment period, and we expect them to take some type of action in the spring,” Greenwood says. Some of the steps the company is proposing — such as stopping the blades at certain times of the year — will lead to less energy production.

“We think that even though it’s a change that probably will cost us a little bit in how much energy the turbines produce — it’s worth it because it is protecting these species. And     these are species that need to be protected,” Greenwood says.

You can see the complete plan here: https://www.fws.gov/midwest/rockisland/te/MidAmericanHCP.html