You are here: Home / Fires/Accidents/Disasters / Safety official warns against drinking and driving during the holiday 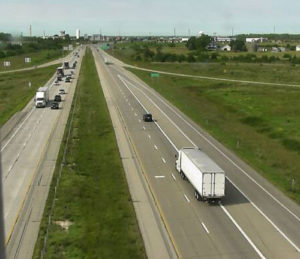 DOT camera view of I-80 near Des Moines.

The chief of the Governor’s Traffic Safety Bureau, Patrick Hoye, is hoping this holiday weekend is a lot safer for motorists in Iowa than it was in 2017.

“Last Labor Day (weekend), we saw 10 traffic fatalities, which was the highest Labor Day count we’ve had since 1995,” Hoye said. “So, coming off of last year, we have some real serious concerns.” Labor Day marks the traditional end of summer and this weekend is typically one of the busiest travel times of the year.

According to Hoye, too many motorists get behind the wheel after celebrating the holiday with alcohol. “One of the trends we saw over last Labor Day was that about 40% of those fatalities were alcohol related,” Hoye said.

Police in Iowa are taking part in a national campaign that involves an increase in law enforcement officers on roadways through this coming Monday. Among other things, they’ll be looking for impaired drivers, so Hoye is encouraging Iowans to plan ahead.

The National Highway Traffic Safety Administration reports that during the 2016 Labor Day weekend, there were 433 fatal crashes nationwide with 36% involving drivers who were drunk.