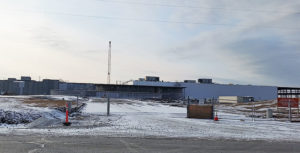 Work continued on the Prestage plant through the winter.

A rural sociologist with Iowa State University is studying the potential impact the new Prestage Farms pork processing plant will have on the nearby town of Eagle Grove when it opens in a few months.

ISU’s David Peters did surveys in the Wright County community and the surrounding area as the massive $240 million facility is nearing completion. “Demographically speaking, obviously, it’s going to increase the population,” Peters says. “The town of Eagle Grove is likely to become a minority-majority community where roughly half of the population will be Hispanic or of a nonwhite race, and there will be a lot more children.”

The plant is expected to open, at least in a limited form, before the end of the year or in early 2019. Plans call for hiring nearly one-thousand workers initially, with the potential for a second shift to be added later, which could mean hiring 500 more people.

“There’s going to be much better quality jobs in Eagle Grove,” Peters says. “Local government services will improve and child care services will improve. On the other hand, local schools will probably become a little bit worse compared to what they (are) now.” Peters recently presented his report to Eagle Grove residents. He says he heard a lot of comments and concerns from those who attended the meeting, worries about things like population growth and crime.

“The majority of questions from the community were really looking at, proactively, what they can do to capitalize on this employment jump and to help newcomers feel more integrated into the community,” he says. Initially, the plant will slaughter 10,000 hogs per day, with half of those hogs coming from Prestage’s own barns.