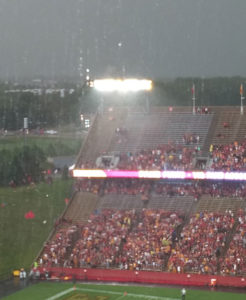 Iowa State University’s season opening football game was cancelled after weather forced players from the field at Jack Trice Stadium in Ames with 10:55 to go in the first quarter.

The game officials cleared the field as lightning was spotted and thunderstorms moved in. The Cyclones were leading 7-0 over South Dakota State following a 55-yard touchdown pass from Kyle Kempt to Deshaunte Jones.

Officials waited for two hours and 24 minutes before announcing they were canceling the game. Many fans had cleared out of the stands after the game was stopped, and those who remained in the stadium watched the radar on the giant scoreboards on both ends of the field, only to see continued storm cells move into the area.

Fans were asked to clear the stadium as the intensity of the storm picked up and bolts of lightning were visible all around the stadium, and then it was announced the game was cancelled.

Iowa State University issued a statement that there are no immediate plans to reschedule the game. The Cyclones will travel to Iowa City next week for the big in-state rivalry game against the Hawkeyes.

The Drake University football game in Des Moines was also cancelled due to severe weather.  The game against William Jewell was stopped with 7:18 remaining in the first quarter with the Bulldogs leading 7-0.

Drake travels to Montana on Saturday.