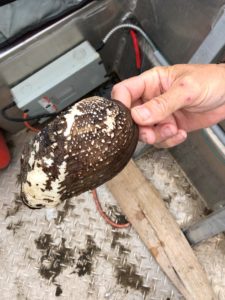 Scientists have reintroduced a type of endangered mussel in the river and biologist Dan Kelner, with the Army Corps of Engineers, says surveys show the animals are reproducing. “If we find mussels in a river, or we find them coming back to a river, we know that it can sustain aquatic life because mussels are longer lived, sedentary animals. So, they can’t move out of the way of perturbations, harm,” Kelner explained.

But dams, pesticides, and farm-field erosion all continue to threaten mussels, which form the bedrock of the freshwater ecosystem. “We have row crops right up to the bank. Which, those banks, when the water gets high, erode into the river,” Kelner said. “There (are) still major problems with a lot of rivers in the Upper Midwest.”

Researchers hoped to find evidence that mussel populations in the Iowa River are growing. Instead, early results from a recent survey of the river show numbers are down from past years.

During the recent survey, 22 distinct live mussel species were found, compared to 20 live species in 2014, but divers encountered fewer mussels overall. According to Kelner, mussels have decades-long life cycles, so they’re a good indicator for the overall health of the river.