You are here: Home / Human Interest / Shutterbugs urged to help show off beauty of Hawkeye State 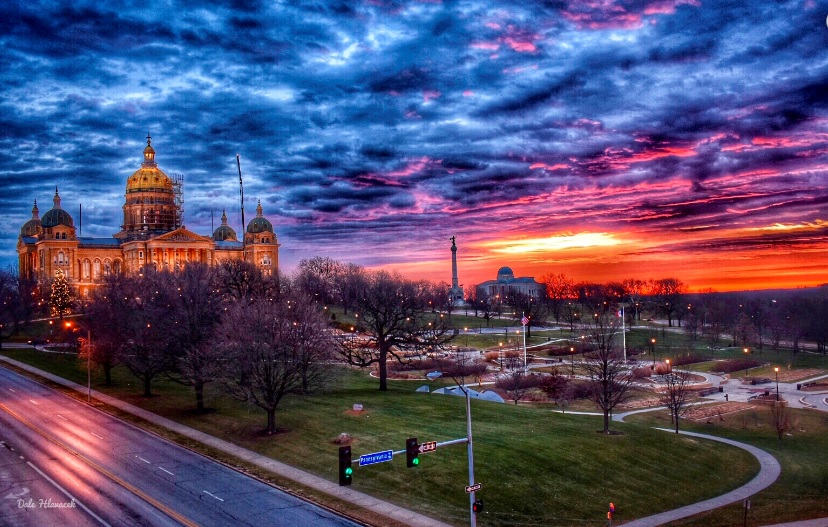 One of last year’s contest winners: Dale Hlavacek of Des Moines, “Sunrise at the State Capitol”

From sunsets reflecting off shimmering lakes to gleaming skyscrapers against a night sky, Iowans who love to take pictures of our state’s many stunning sights are being called to action.

“It’s an opportunity for amateur and experienced photographers to show Iowa’s rural and urban beauty,” Jackson says. “It’s a fun way to show what you, as a photographer or part-time photographer, really enjoy about Iowa.”

Jackson says Iowans can submit their photos now showcasing the land between two rivers. He says the judges tend to see a lot of entries depicting rural landscapes.

“We like to have urban experiences,” Jackson says. “I know in past years we’ve had some river scenes going through communities, we’ve had pictures of the state capitol. It’s whatever you in your area enjoy most about Iowa.”

The first prize winner gets $50, second prize wins $40 and the third-place finisher gets $30.

“And also, each one of those will win a one-year subscription to ‘Our Iowa’ magazine,” Jackson says. “It’s written by Iowans for Iowans and has a lot of great photography and great, fun stories about Iowa.”

Each photographer can enter up to 10 photos at a cost of $5 per entry. The entry deadline is December 14th. Learn more at www.keepiowabeautiful.com.