You are here: Home / Education / Famous & influential ISU grads to be championed in book of biographies 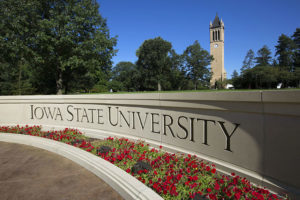 The Iowa State University Museums is putting the finishing touches on a project dedicated to collecting the biographies of ISU students who left a mark on the world.

Allison Sheridan, the collections manager and Farm House Museum manager, says some 550 biographies from 160 years of ISU history are being assembled for a book.

“There are many different biographical dictionaries, in fact, even the state of Iowa has one which we based ours off of,” Sheridan says, “however, for universities and colleges, there aren’t many. For most of them, for example, Oxford in England has one but it stops with people up into the 1800s.”

Sheridan says Iowa State is only the third university in the world to create its own biographical dictionary.

“Ours actually goes through and covers both living and deceased individuals, which is a little bit different than many,” she says. “We cover almost the entire 160 years. In fact, we have important figures that date pre-Iowa State that helped to make sure that this type of institution was here.”

The book will feature the biographies of former ISU presidents William Beardshear and James Hilton in addition to the current president, Wendy Wintersteen, along with hundreds of other Iowa Staters.

“We really worked hard to make sure that the list represented all of the different schools and colleges and departments and make sure that it wasn’t heavily athletics or heavily extension,” Sheridan says, “that everybody had a good, equal representation.”

The biographical dictionary should be out in 2019. Learn more about the project by emailing Sheridan at [email protected]