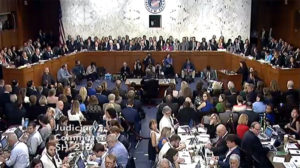 “If people wonder why the chair is so patient during this whole process, I have found that it takes longer to argue why you shouldn’t do anything than to let people argue,” Grassley said.

Democrats this morning asked that the hearing be delayed, complaining they hadn’t been given appropriate access to documents related to Judge Brett Kavanaugh’s legal work.

“What are we hiding with not letting those documents come out?…We are rushing through this process in a way that is unnecessary,” said New Jersey Senator Cory Booker, one of the first Democrats on the committee to challenge Grassley at the start of the hearing.

As protesters began yelling in the committee room, Grassley replied directly to Booker.

“You are taking advantage of my decency and integrity,” Grassley said.

After an hour, Grassley asked the Democrats on the committee how long they planned to go on, airing their complaints.

“Do you want to go on all afternoon?” Grassley asked. “…I want to be patient…but I don’t think we have to hear the same thing three or four times.”

Grassley said there was “absolutely no reason” to delay the hearing. And Grassley indicated the hearing could continue through this Sunday.

“However long people want to take, we’re going to not necessarily accommodate all obstruction, but if people have got something to say, this chairman is going to let them say it,” Grassley said. “But it gets pretty boring to hear the same thing all the time.”

California Senator Dianne Feinstein, the top-ranking Democrat on the committee, accused Grassley of casting aside tradition in favor of speed.

“The majority rushed into this hearing and is refusing to even look at the nominee’s full record,” Feinstein said.

After an hour and a half of debate about how and when the hearing should be conducted, senators on the panel began giving 10 minute speeches. Kavanaugh is expected to deliver his opening remarks to the committee sometime this afternoon. Several protesters have disrupted this morning’s sessions, too. Several shouted: “Please vote no” as they were escorted out of the hearing room.