You are here: Home / News / Hubbell hears of chaos in Medicaid for intellectually disabled Iowans 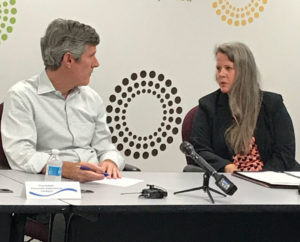 Fred Hubbell, the Democratic candidate for governor, met this afternoon with leaders of agencies that provide care for about 15,000 intellectually disabled Iowans.

“This is a big group in our state that is not being treated very well,” Hubbell said.

The group warned that the state’s privatized Medicaid system is creating chaos for their intellectually disabled clients. Some who cannot live on their own are being denied in-home care or being sent to nursing homes. Kelsey Clark of Madrid, an advocate for Medicaid patients, said having out-of-state companies manage care for intellectually disabled Iowans is leading to “human tragedy” and may force some providers to close.

“If something is not done, there will be issues that you can’t come back from,” Clark said.

Clark and other advocates told Hubbell denying care or just not paying bills are the only ways the managed care companies can “make money” on Medicaid clients who are intellectually disabled, since their care isn’t about health or wellness, but about daily living. Hubbell has pledged to start making changes in the Medicaid system on day one if he’s elected governor.

“This population needs to have a focus on quality of care, keeping them out of institutions and giving them the support and services that they need,” Hubbell told reporters after Tuesday’s meeting.

Shelley Chandler of the Iowa Association of Community Providers said Iowa is the only state that has private companies managing “non-medical care” for its intellectually disabled residents.

Governor Kim Reynolds has acknowledged there were hiccups in the transition to managed care, but she has said the privatized system is helping to control costs for the state. A Reynolds campaign spokesman said late this afternoon that the governor “is focused on getting results and help for every Iowan who relies on this Medicaid system.”