You are here: Home / News / Ponca Tribe has some decisions left to make for new Carter Lake casino 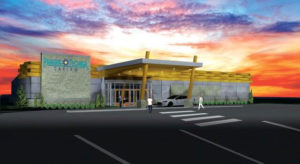 Construction on the Ponca Tribe of Nebraska’s Prairie Flower casino in Carter Lake, Iowa is moving along on schedule, and the casino will soon start filling out the remaining available jobs.

Ponca Tribe chairman Larry Wright Junior says they recently had a job fair for tribal members to fill some spots. “We have several positions already filled now and now we are going to be opening it up her in the next week or so or couple of weeks to the public as a whole. And so we’re going to invite people in the metro area or people looking for a job in the metro area to come to the fair,” Wright says.

The casino expects to have around 100 employees. Wright says another issue they will discuss is whether members of the tribe receive some sort of payment from the casino proceeds.

“That will be a decision for our tribal people to decide, and we continue to work on that item specifically,” Wright says. “But we want to be sure we had other issues addressed first before we start spending money.” Wright says the majority of the tribe backed building the casino because of the jobs and other benefits it would bring. He says they need to know that that can take care of all the needs before moving ahead with anything else.

“There’s lots of things to consider. We offer a lot of programs and services to our people — education, housing, health care — just to name a few,” Wright says. “We look at bolstering those programs to help our people become less dependent on those things.” Wright says they want to be able to present the issue with all the information they can.

“We’ll look at all avenues and give our people as much information so they can make an educated decision,” he says. The Ponca Tribe has some 4,300 members in Iowa, Nebraska and South Dakota. The 9,500 square foot casino with 200 slot machines is expected to be opened sometime in late October.