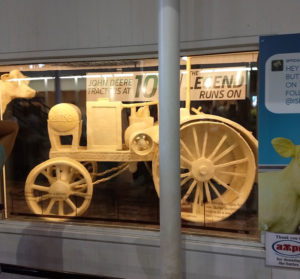 With the 2018 Iowa State Fair now behind them, the foundation that oversees the upkeep of the fairgrounds is working on plans for improvements. Iowa State Fair Blue Ribbon Foundation executive director, Peter Cownie, says a recently announced record donation of $10 million will help them with that task.

“Six of which will go towards renovation of the 4-H Building on the fairgrounds, which will commence after the 2019 Iowa State Fair,” Cownie says. “So we will develop the planning and the budget for that in the next year.” The donation comes from the Richard O. Jacobson Foundation and the remaining four million dollars will go to the foundation’s endowment and help with the upkeep of the other buildings which benefited from donation from the late businessman. While they will spend the next year putting together a plan for the 4-H Building renovation — Cownie says they have a wish list they’ll look at.

“We want to build some new classroom space for it, we want to update the kitchen, the restrooms, we want to update all the lighting, all the flooring, it will be a top down renovation,” Cownie explains. “That facility was built during 1939 and the Great Depressions and it’s obviously the backbone of the fair.” Cownie says the updates will increase the flexibility and use of the building after the annual fair run.

“The primary purpose of the Iowa State Fair is those 11 days every August,” he says, “but we are also renting those facilities out during the interim. It’s rented out in the interim now and it certainly will be in the future. Name it, they can host events in there for that. It can be rented out for that. It can be rented out for a thrift show, a craft show.” Once the renovations is completed after next year’s fair, the 4-H Building will have a dedicated memorial in honor of Jacobson and the 15 million dollars total he donated to the organization. The fair grandstand got a facelift before this year’s fair and Cownie says they have plans for work leading up to next year’s event.

He says it will have about 5,000 seats and allow them to hold their tractor pull there. The Iowa State Fair Blue Ribbon Foundation is a non-profit organization created in 1993 to fix up the building on the fairgrounds. The foundation has raised more than $150 million from individual contributions, state appropriations, in-kind services, and corporate, federal and state grants since it began.