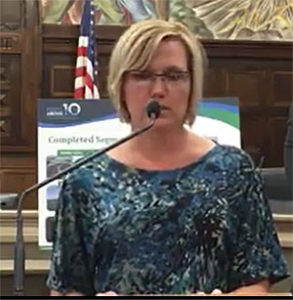 The city of Cedar Rapids is bracing for flooding after days of heavy rains.

The Cedar River is forecast to crest at 16-and-a-half feet tomorrow, which is six inches above major flood stage. City workers are closing roads, parks and boat ramps. Cedar Rapids Public Works Director Jen Winter says any impacts would likely come from the river flowing into the storm sewer system.

“Unless something fails, we anticipate that there would not be damage,” Winter says. “In some cases, depending on the age of a building, some people do get water in their basements despite the fact that we have kind of plugged off the river from backing up.” While the forecast is for 16-and-a-half feet, city workers are preparing for at least 18 feet of water, just to be safe. Winter says they’re also plugging manholes and storm drains to prevent backflow.

“The majority of the risk is from underground,” she says, “so the majority of the risk is from water coming back into our storm sewer system and backing up.” City leaders are urging residents to stay away from the river and to let workers finish their preparations. As updated forecasts become available, the city will consider adding more protections. Cedar Rapids’ last major flood came in 2016, when the river crested at 22 feet.