You are here: Home / Sports / Hawkeye coach says game with Cyclones has importance beyond the state 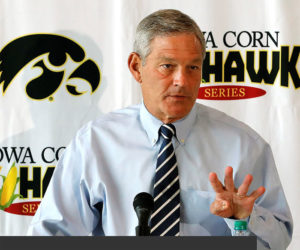 Iowa started slow, but came on in the second half to win their opener with Northern Illinois 33-7 Saturday.

Hawkeye coach Kirk Ferentz says the effort shown by the team carried it through. “I thought our guys played hard, thought they played determined, and that allowed us to play through some bumps in the game, and there certainly were plenty of those,” Ferentz says. “I thought we played good team football, had good responses for the things that didn’t go well — so that certainly was pleasing.”

Ferentz says he especially happy with the way the newcomers responded. He says they had a lot of young guys who got to play in live action and hopefully they will take confidence from the experience and be better as they move forward into the schedule.

In-state rival Iowa State is up next, and Ferentz says they will have to give the same hard effort this week. “Certainly a special game for everybody involved, nothing new there. It’s a great rivalry certainly and one we’re really excited about being part of,”according to Ferentz “And I think it’s not only exciting for our players, our coaches, for alums, fans in the state, but people across the country. It’s a really great thing for everybody I think.”

Ferentz says the Hawkeyes have 12 starters who are Iowa natives. “If you look at our roster — about 50 percent of it is Iowa natives — I think that’s certainly important. It says a lot about the commitment that our players I think have to our university and conversely the commitment we have to the state of Iowa,” Ferentz says.

Iowa will host the Cyclone team which played only 4:05 of the opening quarter before their game was suspended and then canceled due to severe weather.