Senator Chuck Grassley’s town hall meeting in Osceola late this afternoon was a prime example of the country’s partisan divide.

Grassley, a Republican who has served in the U.S. Senate for 36 years, was greeted with applause when he entered the room. The crowd count was 132, according to a tweet from Grassley this evening.

Some sat in an overflow room, observing via livestream. Grassley was asked about tariffs, taxes, criminal justice reform and monopolies, but Grassley’s role in confirming President Donald Trump’s U.S. Supreme Court nominee in the Senate Judiciary Committee was the main flash point. 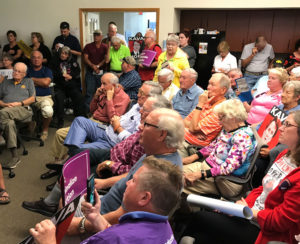 The crowd in Osceola to hear Senator Grassley.

“I’ve been watching every minute, pretty much, of the hearing, so I appreciate your leadership and guidance in that,” a man who said he was from Clarke County told Grassley. “Speaking for the majority, at least of the people I know, I consider Judge Kavanaugh a strong candidate and I encourage you and the senate to confirm him as soon as possible.”

Another man who said he was from Martensdale described himself as a “Chuck Grassley fan” due to Grassley’s work on ethanol and wind energy, “but I’ve been watching the Kavanaugh hearings and it looks like this guy has perjured himself in the past.”

Many in the crowd erupted in cheers and applause as the man continued by asking Grassley: “Are you going to continue to try to fast-track this guy?”

A handful of people in the crowd had posters featuring Kavanaugh’s face and the caption “Kavan Nope” as a play on the nominee’s name. As the hour drew to a close, Grassley called on a man who chided opponents of Kavanaugh for “not showing respect” to those who support the president and his pick for the court. The man asked the crowd to recite the Pledge of Allegiance. A few people walked out. A few said: “Take a knee” and knelt in protest. Most stood and recited the pledge.

Grassley met a few minutes later with reporters for a debriefing of the event. It was the final stop in his “hold-an-event-in-each-Iowa-county” tour for 2018.

“Obviously, this isn’t a very typical meeting compared to the meetings I have, the other open town meetings. Maybe it was because it was a small room,” Grassley said. “…Most of them, people just want to discuss things.”

Grassley, a witness to other moments of national upheaval, predicted this fevered debate will fade — at some point.

Grassley’s event in Clarke County meant he crossed the finish line for what has become known as the “full Grassley” — a visit to each of Iowa’s 99 counties. Grassley had a “blizzard” at Dairy Queen afterwards to mark his 38th consecutive year of a “full Grassley.”