You are here: Home / Fires/Accidents/Disasters / University of Northern Iowa worker killed by steam leak on campus 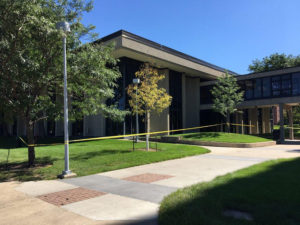 There is warning tape around the Rialto Dinning Center at UNI.

A worker at the University of Northern Iowa in Cedar Falls died today in an accident.

“We had a steam leak here on the campus at the University of Northern Iowa. The leak sadly took the life of a dedicated facilities management team member,” Clingingsmith says. He says the employee who died has been identified as 61-year-old Kevin Bley. Bley had been a UNI employee for 10 years working as a steamfitter.

Clingingsmith says the problems with the building have not led to any issues for students. “They are currently using other dining facilities on campus. So, from that perspective it’s not causing a lot of problems being off line at this juncture,” Clingingsmith says.

Other details on exactly what happened to Bley are not yet available as investigators continue looking into the accident.

UNI President Mark Nook released this statement on the accident: “UNI is built upon a campus culture of caring, and today our campus has lost a dedicated employee. Please keep Kevin’s family in your thoughts as they move through this difficult time.”