You are here: Home / News / Ceremonies across Iowa remember terrorist attacks of 911 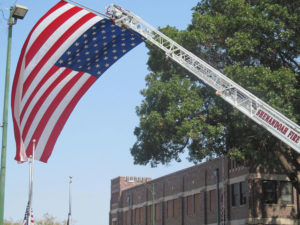 Iowans are remembering the terrorist attacks 17 years ago today which claimed the lives of nearly 3,000 people in New York, Pennsylvania and Washington D.C.

Craig Morris, commander of American Legion Post 88 in Shenandoah, says their Patriot Day events in southeast Iowa will start out with what’s called the Four Fives. “Which is a striking of the bells, which happens when a firefighter loses his life in the line of duty,” Morris says. “The mayor will present a wreath. We’ll be playing taps. We’ll say the Pledge of Allegiance. We’re just going to be there to remember and to pay tribute to all of our first responders.”

Morris was working in an auto manufacturing plant in Michigan the day of the 911 attacks. “We were told that planes were hitting buildings,” Morris says. “Being prior military, I didn’t know if we were under a military attack. Being in Michigan, everybody was panicking, running to the (gas) pumps. It put everybody in quite a panic.”

Today’s ceremony is important, he says, in order to remind everyone of the events on that fateful day. “Those terrorists, they wanted to inflict as much fear into our country,” Morris says. “I still see a lot of that happening today with the hatred. I hope this country hasn’t fallen asleep, because I really believe it can happen again.”

The events are also a tribute, he says, a thank you to every law officer, firefighter and paramedic who’s on the job. “Our first responders need to know that we’re behind them,” he says. “That’s not an easy job to do. We as a nation, we really do need to stay together, united together, and this is a great way to do that.” Shenandoah’s events will begin at 12:10 p.m. at the Bogart Park veterans memorial. One guest speaker is Kim Leininger, whose nephew died in the World Trade Center attacks.