You are here: Home / Fires/Accidents/Disasters / Iowan who died in 911 attacks remembered in Newton ceremony 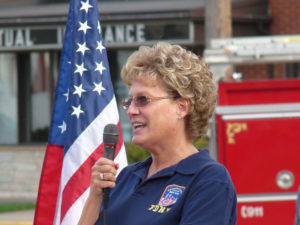 Ceremonies were held Tuesday across Iowa to recognize the 17th anniversary of the 9-11 terrorist attacks. In Newton, Mayor Mike Hansen delivered remarks near a statue honoring firefighters.

“The pain and carnage America suffered will forever remain imprinted in our hearts,” Hansen said. “September 11th is a day in our lives that we will never forget.” A Newton man, 55-year-old Jim Cleere, was the only Iowan among the more than 2,700 people killed at the World Trade Center site in New York. His wife, Jean Cleere, attended yesterday’s ceremony and echoed the mayor’s words.

“Never forget – I pray that that is true,” Cleere said. Jim Cleere was on a business trip in New York on September 11, 2001. He was the assistant vice president of telecommunications for Seebury and Smith of Des Moines. Jean Cleere led a fundraising effort for the monument outside the Newton Fire Station.

It was unveiled in 2012 on the 11th anniversary of 9-11. The sculpture, created by Reasnor artist Nick Klepinger, depicts two firefighters rescuing a child.

(By Randy Van, KCOB, Newton/photo courtesy of city of Newton)