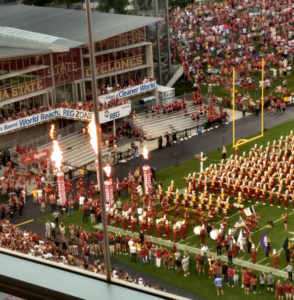 Iowa coach Kirk Ferentz says the Hawkeyes won’t be looking past Northern Iowa when the teams collide in Kinnick Stadium. The recent history has featured close games, including the 2009 Orange Bowl winning team that blocked field goals on the final two plays to preserve a 17-16 win.

“These guys have played well against other people, too, not just us. I mentioned the conference that they play in. I’m not an expert on FCS football, but it seems like that has really grown into a tough, competitive league. You think about the teams that they have to play week in and week out. And what they’ve done, they’ve played us, they’ve played Iowa State, played Wisconsin, it would have been ’14, ’13. When they go on the road, they’re tough,”Ferentz says.

Ferentz says the last three games in the series have been close. “Those are games we all as coaches were involved in, their coaches were involved in, at least Coach Farley, and there’s a common denominator between all three of them. They show up to play, they show up and they’re playing to win, they play tough, they play hard, and we’re going to have to work hard to come out victorious here,” according to Ferentz. Iowa is 2-0, UNI is 0-1 and coming off a bye week.

Iowa State hosts fifth ranked Oklahoma and with Kyle Kempt nursing a knee injury Zeb Noland may get the start at quarterback. After playing well in a 13-3 loss at Iowa the Cyclone defense must hold up against a Sooner offense that wants to spread the field and play in space.

Iowa State coach Matt Campbell says it is a new challenge for the defense. “We are going to find out really fast, you are talking from a power team to a team that is elite speed. Maybe as good as speed as there is in the country. You know ultimately hope schematically that we can adapt with that. I think that’s one of the things about what you do in having flexibility from a scheme standpoint, that you can give yourself a chance, first and foremost,” Cambell says.

Campbell says the Cyclones need to get the ground game going after David Montgomery was held to 44 yards in a loss at Iowa.