You are here: Home / Business / West Delaware students get chance to learn welding and earn money in high school 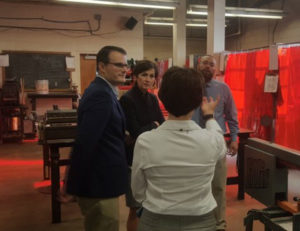 West Delaware High School is recently won approval for a welding program as part of the U.S. Department of Labor’s Registered Apprenticeship in Advanced Manufacturing.

West Delaware will provide on-the-job learning in welding in addition to classroom training in partnership with Henderson Products, XL Specialized Trailers and Paladin Attachments — while also giving students the opportunity to earn almost 30-thousand dollars during their final two years in high school. Delaware County has around 25 welding openings at any given time. West Delaware welding instructor Seth Harms says they hope to bring that number down with this program, giving local industries the workers they need

“For years I’ve been saying that sometimes a student has got a passion at the junior year and they throughout their senior year as they turn 18, that passion changes,” Harms says. “Now we have an opportunity to catch those kids as a junior standing to learn a great skill — a skill that is definitely needed in Delaware County — and earn money while they do it.” And it gives the students a head start in the workforce.

He says they will start with one student for each company and as the companies get more comfortable with the program they could expand it and they could potentially have four companies involved. West Delaware senior Bo Juran says it’s a great opportunity for him and other students.

“Just being a factory worker has been one of my options of a career ever since I was little. I come from a family of welding and I enjoy doing it,” Juran says. “It just seems like fun to me and I’d like to earn money while I am doing it.” Superintendent Kristen Rickey says the program was easy to get started and has lots of state and federal support. Governor Kim Reynolds toured the West Delaware welding lab last week to see how the program works.