You are here: Home / News / One person dead in accident north of Merrill 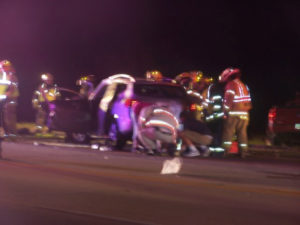 At least one person died in this accident near Merrill.

At least one person was killed in a two-vehicle, Highway 75 accident north of Merrill last night.

Iowa State Patrol trooper Chad Peters says a vehicle with a family of four inside,crossed the center line and struck a second vehicle head-on around 8:50 p.m.

“It appears as though the one that crossed the line left the roadway north of the collision and maybe lost control on the gravel shoulder or tried to correct and it was an over correction. That’s what it appears at this time,” Peters says. No additional information has been released on who was killed in the crash.

A detour in place for nearly three hours as law enforcement officials investigated.