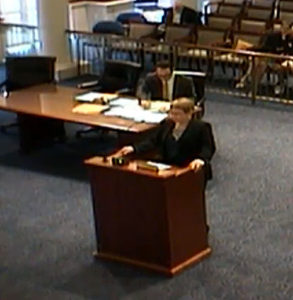 The Iowa Supreme Court heard oral arguments in two cases today where those convicted of crimes say they did not get a fair trial based on the racial makeup of the jury.

Much of the discussion centered on how you determine the racial mix of a community and how that then translates to selecting a jury that’s representative of the community.

Attorney Shellie Knipfer argued on behalf of Kenneth Lilly of Fort Madison, who appealed his first degree robbery conviction. “Mr. Lilly’s all-white jury pool was not a fair crosssection of the community — and therefore he was denied his right to an unbiased jury under the federal and state constitutions,” Knipfer says.

The Supreme Court justices questioned Knipfer about whether it is still an issue in a county that has an extremely low number of minorities. “Whether you are dealing with small numbers or large numbers it makes a difference…When you have a three percent populations and there are absolutely no members — that should be statistically significant,” she says.

She was asked if counties with prisons should have those prisoners removed from the numbers used to determine population and she says they should The justices also asked if the population numbers should also be reduced for people under age 18 who would not be eligible to serve on a jury. Knipfer says the numbers would have to be looked at carefully. “Does it take into fact the high infant mortality rate of African-Americans compared to Caucasians? You have to justify that calculation and make sure it takes into consideration other aspects,” according to Knipfer. 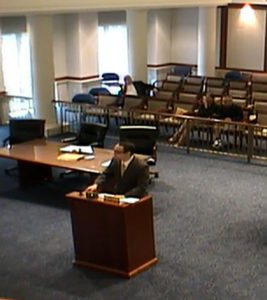 Attorney Louis Sloven represented the state and says it is often hard to get an exact look at the makeup of the population. He says it also depends on how many people show up for the jury pool. “The calculations that you can do here show that there is no unfair or unreasonable underrepresentation. Even if there had been zero distinctive group members — in any sample under a hundred people — you really wouldn’t show a significant level of underrepresentation,” Sloven says.

Sloven was asked about areas that have very small minority populations and he says it is hard to say a pool is not representative when that population is below three percent. “Once you start getting slightly above three and into four, you can find a significant effect with a jury panel of reasonable size,” Sloven says. ” If the defendant is on the cusp, then I think it might be appropriate for a judge who is dealing with an issue that has been raised by the part to say — it might be appropriate to combine jury panels in this instance for the purpose of vindicating this right. Or at least making sure we are not violating it.”

The court heard a similar case in the convictions of Peter Veal of Lake Mills on two counts of first-degree murder and one count of attempt to commit murder. Veal argues the jury pools were unconstitutional.