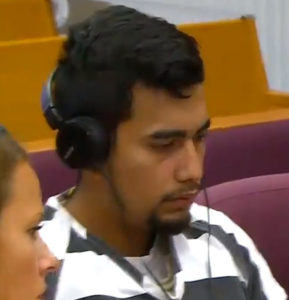 Tibbetts disappeared while out for a run in her hometown of Brooklyn on July 18th. Investigators say surveillance video led them to arrest 24-year-old Cristhian Rivera, who is in the country illegally from Mexico. Rivera appeared in court with an interpreter and District Court judge Joel Yates spoke to his lawyer Chad Frese.

“Mr. Frese at this time I am going to ask you — how does the defendant plead to the charge of murder in the first degree,” the judge asked. “Mr. Rivera pleads not guilty,” Frese replied. “Is that correct Mr. Rivera,” the judge asked. After listening to the interpreter, Rivera said “yes.” The judge then asked about the trial process.

“Mr. Rivera, is it accurate that you have had opportunities to discuss this right with you attorneys of record?,” the judge asks and the reply is “yes.” “And you are knowingly and intelligently waiving your right to a speedy trial?,” he continued. Rivera answered “yes.” The trial has been scheduled to begin at 9:30 a.m. on April 16th.

The search for the 20-year-old Tibbetts lasted for more than one month and drew national and international attention as it went on. State investigators say Rivera followed Tibbetts as she ran and then became angry when she said she was going to call police. He led them to Tibbett’s body in a cornfield on August 21st. Investigators say Rivera told them he doesn’t remember killing Tibbetts because he blacked out.

Frese talked with reporters after the arraignment and says they waived the right to a speedy trial because it till take time to prepare. “This is a complicated case. It has a lot of evidence to be analyzed — a lot of work that we have to do — so it is a strategic move that we have chosen to take,” Frese says. Rivera remains in jail on on a $5 million cash only bond.