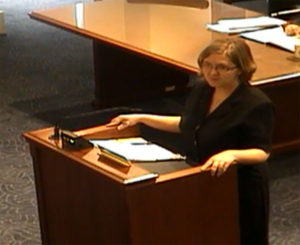 The Iowa Supreme Court heard arguments in a case Tuesday where a Waterloo woman was stopped for having a license plate light out and ended up being charged with drunk driving.

Attorney Theresa Wilson represented Scottize Brown, and argued traffic stops are often made under the pretext of minor violations when law enforcement really has a different, sometimes discriminatory, reason for stopping a driver. Justice Brent Appel questioned how a change would impact the legal system.

Justice David Wiggins also questioned Wilson. “But is it really arbitrary if there is a valid violation of our traffic laws? I mean there is a reason that the officer pulled someone over,” Wiggins says. “There is a reason potentially — in this case there wasn’t — he said he wasn’t going to pull Miss Brown over for a traffic violation. The problem is the unrelated purpose of the stop,” Wilson replied.

Assistant Attorney General Kelli Huser ) says banning these traffic stops would cause problems for law enforcement and the courts trying to determine their intentions.

“When the defense asks that it (traffic stops) only be limited to a minor violation — who determines what minor means?,” Huser says. Huser says if the officers are misusing the ability to stop someone for these types of violations, then there are other remedies available.

“We have seen how technology advances have allowed us to see what is happening in those stops. We have a lawsuit that has press right now looking into equal protection violations. The idea that there is selective enforcement of traffic laws — that is an equal protection problem,” Huser says. She says the officer did not know Brown’s race before stopping her, and did so for another reason.

She says the officer stopped the car because of a potential gang affiliation of Brown and she says that could be same as running a license plate and there was an OWI on the driver’s record. “I think it suggests criminal behavior that in many cases as was suggested before, was good police work and not that there was improper intent,” according to Huser. Wilson pointed out that in a lot of cases believing someone is in a gang could be linked to racism.

Wilson summed up her arguments saying that changing the law may not end stops by police for the wrong reason. “But the one thing it will definitely do is give members of our minority communities more confidence in a justice system that represents them and keeps their interests in mind when it comes to their civil rights and their rights to privacy and personal security,” Wilson says.

The Supreme Court will issue a ruling on the case at a later date.