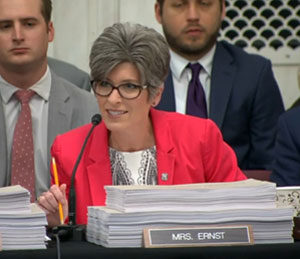 Iowa Senator Joni Ernst says negotiations on the next Farm Bill have “taken a turn” in the wrong direction. Ernst is the only Iowan on the committee of House and Senate members assigned to come up with a new five-year Farm Bill by the end of the month.

“I don’t think we’re close and, unfortunately, it’s just taken a turn over the last week or so,” Ernst said during an interview with Radio Iowa. “I was very optimistic. I’m going to remain optimistic, but it’s starting to wane right now. We could be looking at a one-year extension.”

That means the current Farm Bill provisions would be extended through 2019, giving congress 12 more months to negotiate “which I don’t want to see,” Ernst said. “I want to see the Farm Bill done.”

The main sticking point is whether to enforce new work requirements for Americans who receive government nutrition assistance — commonly referred to as “food stamps.” The proposal was included in the version of the Farm Bill that cleared the U.S. House, but not the one that passed the Senate. Ernst says conference committee members have worked through other points of friction.

If the debate over work requirements for nutrition assistance continues into 2019, it could occur in a reorganized committee with new members and, perhaps, under Democratic rather than Republican control.

“Let’s get it done now,” Ernst said. “That’s what I keep pushing the chairman to do.”