You are here: Home / Fires/Accidents/Disasters / Northern and western Iowa seeing another round of flooding after heavy rain 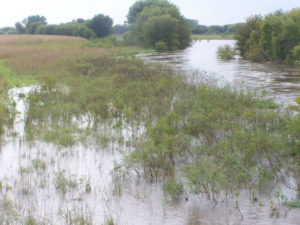 The Floyd River near Alton.

Parts of northern Iowa that saw heavy flooding just a few weeks ago again face high water after a series of powerful thunderstorms dumped on the region Wednesday and more rain is coming.

Jeff Zogg, a hydrologist with the National Weather Service, says the areas of Iowa at worst risk for flooding are essentially everything north of Highway 20. “There are some places that received anywhere from two to five inches of rain yesterday and last night and some places have received over nine inches of rain over the past couple of days,” Zogg says. “It’s a repeat of what we saw earlier and it’s resulting in the flooding we’re seeing across northern Iowa, the flash flooding as well as the anticipated river flooding.”

“The warm front that’s triggering a lot of this heavy rainfall may move north into Minnesota and take some of the heavy rain with it,” Zogg says. “If that does happen, most of the rain would be confined to a cold front that will sweep across the state later on this evening and the rainfall from the cold front, although it will be heavy, will be relatively brief. It wouldn’t be as heavy if the warm front does stick around.”

National Weather Service Meteorologist Mike Gillispie in the Sioux Falls office has also been keeping an eye on the rain gauges. He says some areas located north of Le Mars received as much as ten inches of rain within the past week. “Areas from says Lyon, Sioux County over into O’Brien and Clay have really been kind of the focus of the heavy rains in the last couple of days,” Gillispie says, “Overnight and early this morning we are showing basically a pretty widespread two to four inch rainfall up there with some isolated amounts up into that five to six inch range.”

He says the Floyd River near has already hit flood stage at Sheldon, Alton and down to Orange City. He expects the same by later this evening in Le Mars. “The west branch near Strubel has gone above flood stage and it looks like right now on our latest forecast we’re expecting the Floyd at Le Mars to go over flood stage probably early this evening. Six, seven o’clock, in that time frame,” Gillispie says.

The Floyd River is expected to crest sometime Friday at about two feet above flood stage. Gillispie says the Big Sioux River is also rising. “The Brandon area, Canton and down to Haywarden are all right at flood stage now and still climbing. A little farther south, you go down to the Akron gauge is probably not going to hit flood stage until mid-evening, says ten o’clock this evening,” according to Gillispie. “The crests on the Big Sioux are going to be a little bit later — we’re looking at probably Sunday or Monday before we see the crest move through that lower portion of the Big Sioux.

Gillispie doesn’t expect the flooding conditions to be as widespread as the flooding that had occurred in June over much of the same area. Gillispie says the Rock River basin may see the worst flooding. He says Rock Valley will probably hit flood stage tonight around nine or ten and the crest will occur tomorrow afternoon into tomorrow evening. He says the Rock River could drop below flood stage as early as Saturday evening. Gillispie says many of the secondary roads will have water over flowing by this evening. Both Sioux and Plymouth County authorities report some county gravel roads are closed due to flood waters.

Fall arrives on Saturday and it’ll soon feel like autumn. Zogg says while parts of Iowa are expecting high temperatures in the 80s and low 90s today, after the cold front moves through, Friday’s highs may only be in the 50s and 60s statewide.

(Dennis Morrice, KLEM, Le Mars, contributed information and the photo to this story)