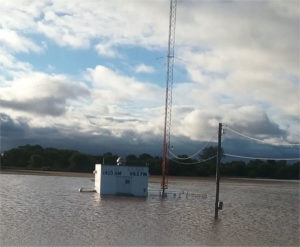 Emmet County was one of the areas hit hardest with destructive winds and heavy rainfall. There are reports of power outages, as well as numerous trees and branches down.

One listener reported extensive damage to the Green Plains ethanol plant office in Superior and damage to equipment and trucks at the Superior Coop. Part of the roof was torn off, along with blown out windows and an outside wall was ripped off the structure.

There were reports of other buildings and homes in the Estherville area that received extensive damage. As a precaution, several businesses along Central Avenue were evacuated because of a natural gas leak. Iowa Lakes Community College evacuated students from two dorm buildings due to downed power lines. All students were safe and were able to return to the dorms later in the evening.