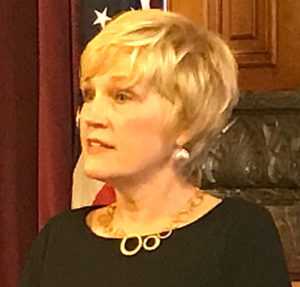 The newest member of the Iowa Supreme Court put on her late father’s official black robe this afternoon after she took the oath to serve as a justice on the state’s highest court.

Christensen accompanied her father to the Supreme Court when he was an attorney and she was a young girl, sitting in the front row eating potato chips as her dad argued a case in front of the justices. “He fiercely loved me and I never stopped watching him,” Christensen said. “…He continues to be with me in spirit and I feel his presence around me today…This robe is his.” Five former justices who served with Christensen’s father were at today’s ceremony in the Iowa Supreme Court’s hearing room.

In August, Governor Reynolds introduced Christensen as her pick for the opening created by the retirement of one of the seven court justices. Since then, Christensen says she’s received “a ton” of email, texts, letters and handwritten notes. “From young women and girls across our state and elsewhere,” Christensen said. “It is truly humbling. I embrace that challenge. I didn’t realize how much other people needed that.”

Iowa Supreme Court Chief Justice Mark Cady closed the event by noting the “new appearance” of the court, since a woman is now one of the seven justices sitting on the bench. “It has new perspectives and it has a new voice,” Cady said,” and, as in the past, this will help bring a new understanding which has been so important to the development of the law, over time.”

Two other long-time friends and legal colleagues of Christensen spoke during the ceremony. Christensen invited her grandchildren up to her seat on the bench and let them bang a toy gavel at the end of the event.