You are here: Home / Sports / Cyclones get first win of season against Akron on emotional day 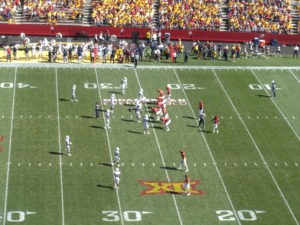 Iowa State got its first win of the season beating Akron 26-13 in an emotional day at Jack Trice Stadium in Ames.

Players from both teams stood on the sideline and joined the crowd in a moment of silence before the start of the game to honor ISU student and athlete Celia Barquin Arozamena. She was murdered Monday morning at the Coldwater Linds golf course that sits just east of the football stadium. 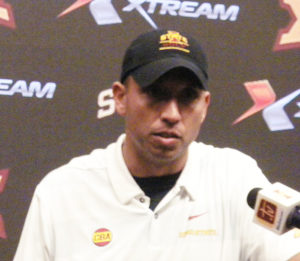 game. “A tough week an emotional week in Ames, Iowa. And to be quite honest with you, you hope a little bit of today starts the healing process. We’ve got the best fans in the country and quite honestly it was a very interesting week in a lot of ways in terms of watching this community rally around each other,” Campbell says.

He says it is something they saw earlier this year when storms and tornadoes hit Iowa. “One of the things that makes it really special to be an Iowan is how these communities rally around each other and stand together, so I thought a really impactful day,” Campbell says, and obviously the game being a second part of the day in a lot of ways — great to go get a win.”

Akron game into the game at 2-0 after an upset win over Northwestern, took a 7-0 lead in the first quarter before ISU tied it up about three minutes later, and then went ahead on a field goal and never gave back the lead. But the Cyclones had several drives stall and had to settle for three field goals in the fourth quarter.

Campbell says they had too many mistakes in the second half. “Big plays happened, good things happened and then you know we shoot yourself in the foot a little bit and you can’t do that here at Iowa State, you can’t win games,” Campbell says. “We won today because we stayed the course, ran the football and stopped the run. Those things are really what allowed us to mitigate some of those mistakes.”

Cyclone quarterback Zeb Noland also talked about the emotion at the start of the game. “That was a quiet place for a second and it just brought out a realization for use as on the football because during the whole day we’ve been at the hotel and everybody else has been enduring that,” Noland “”When the moment of silence came it was truly eye opening, and coach Campbell prepared us for that, he said it was going to be emotional just take it in very well.”

“I think we’ve just got to keep sustaining drives, keeping the defense off the field. It’s great that we are kicking field goals and getting three points, but we’ve got to score touchdowns, that’s what’s most crucial to the game of football, scoring touchdowns, we are just going to come back and try to put more points on the board,” Noland says.

The Cyclones take their 1-2 record on the road Saturday to face TCU.