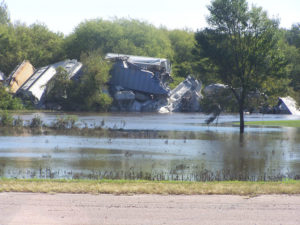 A Union Pacific freight train derailed early Sunday morning in Alton. The derailment occurred on as a railroad bridge crossing the Floyd River collapsed, sending rail cars into the flooded waters on the north side of town.

According to Sioux County Emergency Management Director Nate Huizenga, the call came in from a Union Pacific conductor at about 4 a.m.

“It was dark yet and he just knew that the bridge probably had failed,” he said. “…The main thing was just to keep a perimeter and wait for the sun to come up and see what the damage was.”

“We basically had bulk, gravity-flow containers with sand in them,” Van Es said. “And there was probably one tanker in there with a little bit of soy oil in it.”

Union Pacific crews were on the scene Sunday, assessing the damage, evaluating what could be salvaged and how much clean-up was required. Van Es said Union Pacific crew indicated it could take up to two weeks to clean up the site. As heavy construction equipment arrives and moves around Alton, Van Es said a number of streets in Alton will be barricaded.

“Barricades are there for a reason,” he said. “It’s not just that we want to keep people out. I know everybody wants to see something because it doesn’t happen every day in a small town, but we do need to keep everybody safe and look after what these guys are doing and make sure they can do their job.”

No injuries were reported in the accident and evacuations were not necessary. The total number of rail cars is still unknown, as is the number of derailed cars. This is the second train derailment in northwest Iowa this year. Both derailments occurred during flood conditions.