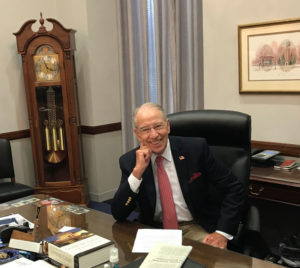 Senator Grassley in his office on his 85th birthday.

Last Monday, Senator Chuck Grassley celebrated his 85th birthday, but what he had called his “home to dome” run wasn’t part of the routine.

“I did that three times, but I haven’t done it and I won’t do it again ’cause I’m 85 years old,” Grassley said on his birthday during a Radio Iowa interview in his Washington, D.C. office.

The distance from Grassley’s home in the D.C.-area to his Capitol Hill office is 6.2 miles. Grassley ran that “home to dome” distance to mark his 80th birthday, then did it again when he turned 81 and 82.

“When I first did it, it took an hour and 20 minutes and the last time I did it…it took 20 minutes longer,” Grassley told newspaper reporters last week during a telephone conference call.

Grassley still runs four times a week, starting out at about 4:15 a.m. and covering about three miles. He started his 85th birthday last Monday with a three mile run. A few hours later his wife joined him and other guests in a Capitol Hill committee room for an ice cream party.

A couple of days later, Grassley told reporters he had cut his running route to two miles in order to get to work earlier as he manages a Senate Judiciary Committee hearing about sex abuse allegations against Supreme Court nominee Brett Kavanaugh.