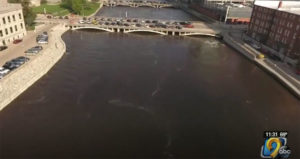 The city of Cedar Rapids is watching the Cedar River rise with a projection of the water hitting above flood stage for the second time this month at 17.5 feet.

“We were fortunate a couple of weeks ago — that one crested out at about 15.5 feet. So it actually did not meet our major flood stage, which is 16 feet. Today we are sitting about 17.3, looking like this time we will crest out at about 17.5 feet,” according to public works director Jen Winter. Winter says they have a lot of permanent flood protections in place, but do have to close several streets and take some temporary measures.

She says they still have a lot of storm sewer outlets directly to the river that have to be plugged so the river doesn’t get in. “The challenge today is now we’ve gotten kind of a heavy shot of rain here. Any time we have rain that falls when the river is elevated — that causes some additional problems,” Winter says. She says being put on alert twice in the same month is unusual — as is having it happen in the fall.

“Historically we have not see September be really a flooding month, so very few times in history have we reached major flood stage in September,” Winter says. “And now while we haven’t reach flood stage twice, it was predicted to reach it twice. Our preparation always goes off the prediction. We never really know what that actual flood elevation will be.” A pattern is starting to form, as the city saw the river reach 22 feet during this same week of September back in 2016.

“In 2016 we thought maybe that was sort of a one time event in a September flood. And now it would appear that we are going to see an increase in fall flooding” she says. The rise in the river is a result of heavy rains that hit way to the north of Cedar Rapids and Winter says that slug of water should move out in the next few days.

“Hopefully buy the end of the week we will be back at least under major flood stage and down into the moderate and minor level and back to more normal where we will be able to take down some of the pumps and some of the monitoring and open up our streets,” Winter says. The city did finally receive federal money to help build permanent flood protections in the wake of the major flooding in 2008. Winter says as those projects move forward, it will become easier to respond to new flooding threats.