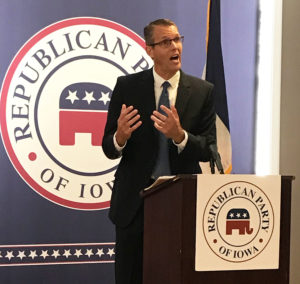 “For decades, Fred Hubbell has worked at every angle in the tax code for his investments, for his companies, for his family, for his personal property,” Feenstra said. “It’s true Fred Hubbell was born into money. That’s not a problem, but he has continued to create extreme wealth by using credits and deductions of our great state.”

The Hubbell campaign’s communications director said in a statement it was ” nice Republicans took the time today to talk about how Fred advocates against his best interest” by calling for an end to “wasteful tax giveaways in the current tax system.”

Hubbell has an ownership stake in Hubbell Realty, a company his great-great grandfather started in the 1850s. Feenstra told reporters Hubbell should have had Hubbell Realty decline $750,000 in state tax credits earlier this month.

“When you start chirping about other people that are getting tax credits when you’re getting a lot of tax credits…then maybe you should have stopped two weeks ago and said: ‘Hey, I’m not going to take these tax credits. I don’t believe in them,'” Feenstra said.

Hubbell and the rest of the panel, for example, called for an end to having the state write checks to corporations that claimed tax credits worth more than the corporation’s income tax liability to the state. Feenstra said Republican legislators and Governor Reynolds have promised to review state tax credit policies next year.