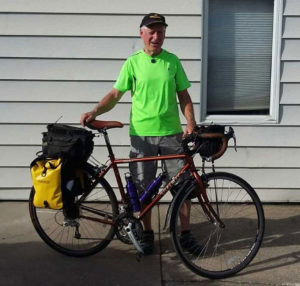 A Dubuque man is bicycling his way across Iowa and Wisconsin to raise awareness about the growing problem of human trafficking in the Midwest and nationwide.

Kevin Schwendinger started his journey last Friday in Omaha and is pedaling eastward about 75-miles a day. His path is deliberate as it includes highways and interstates authorities say traffickers also use.

Schwendinger says, “I’m adjusting my route as necessary depending on bad weather, but basically Omaha to West Des Moines and then up over the top along the eastern and northern corridors of Iowa, over to Iowa Falls, Cedar Falls, Dubuque, Madison and over to Milwaukee.” Schwendinger says human trafficking is destroying lives and it’s netting criminals billions of dollars.

“It’s underestimated how big the issue is. It’s the second-fastest growing illegal industry in the United States, outside of illegal drugs,” he says. “I think people don’t think it happens in small town America.” Boys and girls between the ages of 12 and 16 are being snatched from streets all over Iowa and the region and forced into the trade.

“Some are victims twice, basically, of maybe an abuse situation or a dysfunctional family,” he says. “They find themselves very lonely, separated from their family and then someone promises to do something for them and then they’re swept off their feet before they know it and they’re isolated.” Schwendinger is not asking for donations during his bike ride. He’s just talking to people and trying to raise awareness. He hopes to finish his ride October 6th in Milwaukee.

Learn more from the Ames-based Network Against Human Trafficking and Slavery at www.iowanaht.org.