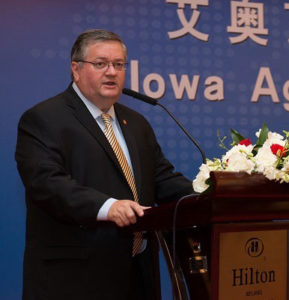 Kirk Leeds, president and CEO of the Iowa Soybean Association, says hopes for a short-term resolution to the trade war with China are fading. “It’s clear that both the U.S. government, and now the Chinese government even more so, appear to be kind of laying in for a long battle here,” Leeds says. “There’s just very little reason right now to be optimistic about any short-term resolutions.”

U.S.D.A. Trade Undersecretary Ted McKinney told reporters this week that the dispute between the U.S. and China could go on for months. A study released Tuesday by Iowa State University estimates, because of new tariffs, Iowa’s soybean industry faces loses between $159 million and $891 million. Leeds says it’s possible the situation will get worse before it gets better.

China, which uses one-third of the world’s soybeans, placed a 25% tariff on U.S. soybeans in July. Iowa is the second-leading soybean producing state in the U.S. behind Illinois. The study from ISU’s Center for Agriculture and Rural Development claims overall losses from the tariffs to Iowa’s gross state product range from $1 billion to $2 billion.