More than a dozen people and organizations are being honored by the World Food Prize organization for their roles in an effort 39 years ago that helped save the lives of thousands of refugees along the Cambodian border of Thailand.

In October of 1979, Ken Quinn was an aide to then Governor Robert Ray as they traveled to Thailand and were taken to a camp where 30,000 victims of the Khmer Rouge Genocide had escaped.

“So, just imagine if the entire student body of Iowa State University were out lying about in an open field – starving, emaciated, weak, some unable to move, and dying at 50 to 100 a day,” Quinn said. Quinn is now president of the World Food Prize Foundation, which will present the 2018 Robert D. Ray Iowa SHARES Humanitarian Award to 14 individuals and organizations.

The recipients were identified today, which would’ve been Governor Ray’s 90th birthday. Ray’s stories and pictures of the refugee camp led to the formation of the Iowa SHARES campaign. It resulted in over a-half-million dollars in contributions from Iowans being sent directly to the Thai-Cambodia border. 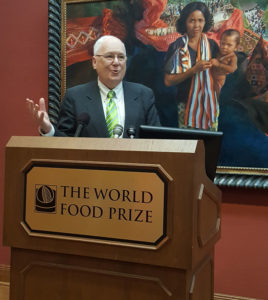 Quinn said it helped lessen the impact of one of the worst genocides of the 20th century. “Cambodia had seven-million people and in four years, close to two-million were dead,” Quinn said. “It is difficult, until you see the images of that, to even begin to understand what they went through.”

Iowa SHARES, which stands for “Iowa Sends Help to Aid Refugees and End Starvation,” was launched the day before Thanksgiving in 1979. Governor Ray and others encouraged Iowans to donate to the campaign. “Between Thanksgiving and January 20th, $500,000 came in,” Quinn recalled. During the week of Christmas, truckloads of food and medicine were sent to the Cambodian border – along with volunteer doctors and nurses from Iowa. “The trucks get to the border and the food is being delivered…some places to people who are surviving on insects,” Quinn said.

Over a two-year period, approximately $550,000 was donated by Iowans to the Iowa SHARES campaign. Quinn noted THAT amount of money would be the equivalent of approximately $2 million in 2018. The 14 recipients of this year’s Iowa SHARES Humanitarian Award will be formally recognized on October 15 at the Iowa Hunger Summit in Des Moines.

Here are the 14 award recipients: