“Both Dr. Ford and Judge Kavanaugh have been through a terrible couple of weeks. Both they and their families have endured vile threats,” Grassley said. “What they have endured ought to be considered by all of us as unacceptable and a poor reflection on the state of civility in our democracy.”

Grassley also defended his decision to have a prosecutor from Arizona ask questions of both witnesses, rather than have the 11 Republicans on the committee do the questioning. Grassley said Democrats’ complaints about the decision were “just plain politics.”

“The testimony we will hear today concerns allegations of sexual assault, very serious allegations. This is an incredibly complex and sensitive subject to discuss,” Grassley said. “That is why the senators on this side of the dais believe an expert who has deep experience and training in interviewing victims of sexual assault and investigating sexual allegations should be asking questions.”

Grassley said his goal for today was to hold a “safe, comfortable and dignified” hearing.

“I hope my colleagues will join me in this effort of a show of civility,” Grassley said. “With that said, I lament how this hearing has come about.”

Grassley chided the top Democrat on the committee for failing to confidentially share Ford’s allegations with him in August, so they could be investigated. 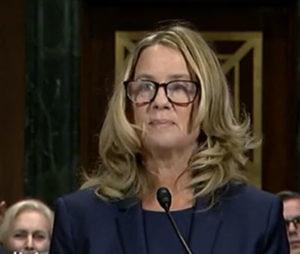 “Then, sadly, the allegations were leaked to the press and that’s where Dr. Ford was mistreated,” Grassley said. “This is a shameful way to treat our witness, who insisted on confidentiality and, of course, Judge Kavanaugh who has had to address these allegations in the midst of a media circus.”

Grassley spoke for nearly 14 minutes to open the hearing. Ford began her testimony shortly after 9:30 Iowa time this morning. During his remarks, Grassley accused attorneys for two other women who’ve publicly accused Kavanaugh of misconduct of refusing to cooperate with senate staff.

“The committee can’t do an investigation if attorneys are stonewalling,” Grassley said.

Democrats on the panel continued to ask for a FBI investigation of the allegations from Ford and the other two public accusers.

After the first break in today’s hearing, Grassley told reporters he did not plan to make “hasty comments” about his reaction to Ford’s testimony. “Maybe it’s something I ought to sleep on. This is pretty important,” he said.

At about 1:15 p.m. Iowa time, Senator Grassley spoke to Ford as her time in the witness chair ended.

“I can only speak as one of 21 senators here, but I think you very much for your testimony,” Grassley said in the committee room, “more importantly, for your bravery coming out and trying to answer our questions as best you can remember.”

After a 45 minute recess, Kavanaugh is scheduled to speak to the committee.

Video of Grassley’s remarks are here.

Prepared Statement by Senator Chuck Grassley of Iowa
Chairman, Senate Judiciary Committee
Continuation of the Hearing to Consider Judge Brett M. Kavanaugh to serve as an Associate Justice on the Supreme Court of the United States
September 27, 2018

I understand that both Dr. Ford and Judge Kavanaugh have been through a terrible past few weeks. They and their families have received vile threats. What they have endured is unacceptable and a poor reflection on the state of our politics. So I want to apologize to you both for the way you’ve been treated. I intend to make today’s hearing safe, comfortable, and dignified. I hope my colleagues will join me.

With that said, I lament the way this hearing has come about. On July 9, 2018, the President announced Judge Kavanaugh’s nomination to serve on the Supreme Court of the United States. Judge Kavanaugh has served on the most important federal appellate court in the country for the last 12 years. Before that, he held some of the most sensitive positions in the federal government. The President added Judge Kavanaugh to his short list for the Supreme Court more than 9 months ago – on November 17, 2017. As part of Judge Kavanaugh’s nomination to the Supreme Court, the FBI conducted its sixth full-field background investigation of Judge Kavanaugh since 1993 – 25 years ago. Nowhere in any of these six FBI reports, which committee investigators have reviewed on a bipartisan basis, was there ever a whiff of any issue – at all – related in any way to inappropriate sexual behavior.

Dr. Ford first raised her allegations in a secret letter to the Ranking Member nearly two months ago in July. The Ranking Member took no action. The letter wasn’t shared with me, our colleagues, or my staff. These allegations could’ve been investigated in a way that maintained the confidentiality Dr. Ford requested.

When I received Dr. Ford’s letter on September 13, my staff and I recognized the seriousness of these allegations and immediately began our Committee’s investigation, consistent with the way the Committee has handled such allegations in the past. Every step of the way, the Democratic side refused to participate in what should’ve been a bipartisan investigation.

After Dr. Ford’s identity became public, my staff contacted all of the individuals she said attended the 1982 party described in the Washington Post article. Judge Kavanaugh immediately submitted to an interview under penalty of felony for any knowingly false statements. He denied the allegations categorically. Democratic staff was invited to participate—and could’ve asked any questions they wanted to—but they declined. Which leads me to wonder, if they’re really concerned with getting to the truth, why wouldn’t you want to talk to the accused? This is what the Committee always does when we receive any allegations of wrong-doing.

My staff reached out to the other individuals allegedly at the party—Mark Judge, Patrick J. Smyth, and Leland Ingham Keyser. All three submitted statements to the Senate under penalty of felony denying any knowledge of the events described by Dr. Ford. Dr. Ford’s lifelong friend, Ms. Keyser, stated she doesn’t know Judge Kavanaugh and doesn’t recall ever attending a party with him.

The FBI provided us with the allegations. Now it’s up to the Senate to assess their credibility. Which brings us to today.

I look forward to a fair and respectful hearing. Some of my colleagues have complained about the fact that an expert on this side in investigating sex crimes will be questioning the witnesses. I see no basis for the complaint other than base politics. The testimony we will hear today concerns allegations of sexual assault. This is an incredibly complex and sensitive subject to discuss. That is why the senators on this side of the dais believe an expert who has deep experience and training in interviewing victims of sexual assault and investigating sexual assault allegations should be asking questions. This will be a stark contrast to the grandstanding and chaos we saw from the other side earlier in this hearing process.

I can think of no one better equipped to question the witnesses than Rachel Mitchell. Ms. Mitchell is a career prosecutor and civil servant with decades of experience investigating and prosecuting sex crimes. She has dedicated her career to seeking justice for survivors of sex-related felonies. Most recently, Rachel was the Division Chief of the Special Victims Division in the Maricopa County Attorney’s Office, which prosecutes sex crimes and family violence. Governor Janet Napolitano previously recognized her as the Outstanding Arizona Sexual Assault Prosecutor of the Year. And she has spent years instructing prosecutors, detectives and child-protection workers on how to properly interview victims of sexual assault and abuse. With her aid, I look forward to a fair and productive hearing.

I understand that there are two other public allegations. Today’s hearing was scheduled in close consultation with Dr. Ford’s attorneys, and her testimony will be the subject of this hearing. We have been trying to investigate these allegations. At this time, we have not had cooperation from attorneys representing other clients, and they have made no attempt to substantiate their claims. My staff has tried to secure testimony and evidence from attorneys for both Deborah Ramirez and Julie Swetnick. My staff made eight requests for evidence from attorneys for Ms. Ramirez and six requests for evidence from the attorney for Ms. Swetnick. Neither attorney has made their clients available for an interview. The Committee can’t do an investigation if attorneys are stonewalling.

Additionally, all of the witnesses should know that they have a right, under Senate Rule 26.5, to ask that the committee go into closed session, if a question requires an answer that is a clear invasion of their right to privacy.” If either Dr. Ford or Judge Kavanaugh feel that Senate Rule 26.5 ought to be invoked, they should simply say so.