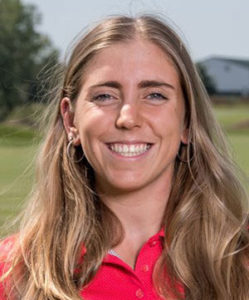 A court appearance planned for today for the man accused of killing an Iowa State University student has been rescheduled.

Twenty-two-year-old Collin Richards is charged with first-degree murder for the September 17 death of 22-year-old Celia Barquin Arozamena, a former star on the ISU golf team. She’d been golfing by herself that morning in Ames before other golfers came across her golf bag and other belongings on the course and called police.

Arozamena’s body was then found in a pond. “She’d been stabbed in the upper torso, head, and neck,” Ames Police Commander Geoff Huff told reporters. Huff said Richards killed Arozamena in broad daylight. The Coon Rapids native, with a criminal record, had been living in a tent in a wooded area near the course.

“During a search of the tent and surrounding area, a black backpack was located with two pairs of shorts with stains that tested positive for the presence of human blood,” Huff said. “A knife was also recovered from that location.” Richards’ arraignment is now scheduled for October 8 at the Story County Courthouse.

The Story County Attorney requested that the preliminary hearing, originally scheduled for today, be pushed back.