You are here: Home / Fires/Accidents/Disasters / Historian traveling state to tell story of ‘The Killer’ flu virus 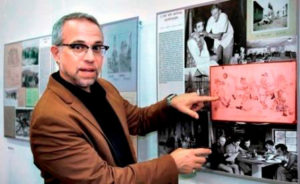 A century ago, a deadly flu virus swept across the world and experts are still trying to understand the scope of the disaster that killed millions of people, including more than 6,000 Iowans.

Over the next month, social historian Michael Luick-Thrams will visit dozens of libraries, schools and museums with a presentation he calls, “The Killer.” “We are the consequence of the things that our ancestors did, the things they thought, the decisions they made, changes they were willing to make or not. And so by looking at the tea leaves leave of time, hopefully we can get some wisdom for today.”

Luick-Thrams, who directs the nonprofit TRACES, says history offers a distant mirror of how we as a society respond to the crises in our own time. He says TRACES uses historical events to bring people together to discuss challenging subjects.

“It’s now literally a century later, in September, October and November of 1918, this virus was raging across our state, across our country, across the world,” he says, “and with its centennial I’m surprised how few people know about it and even those who know about it don’t seem to know much about it.”

Luick-Thrams says he wants people to understand why the residents who survived the flu epidemic largely chose not to share their stories. He says learning about society at that time, and how it influenced the history that got passed down, may give people a better understanding of today’s challenges — including what gets debated and what gets suppressed.