You are here: Home / Agriculture / Iowa sees an increase in number of hogs, still top producer in U.S. 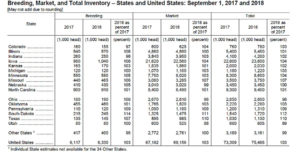 Iowa is holding onto the top spot in the country when it comes to producing pigs.

The U.S.D.A.’s latest inventory of all hogs and pigs in the country was 75.5 million as of September 1st, which is up 3% from June. The report shows Iowa has 23.6 million pigs — increasing 4% from the previous year.

That means there’s just about eight pigs for every person living in the state. Iowa is well ahead of the second leading pork producer North Carolina — which has 9.4 million pigs. Minnesota is third in with 8.6 million.