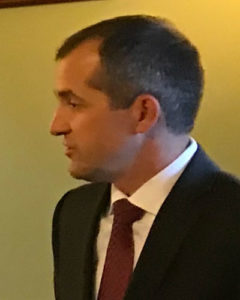 Republican office-holders in Iowa are celebrating this weekend’s break-through on a deal that will replace the North American Free Trade Agreement. President Trump calls it the U.S. Mexico Canada Agreement.

“Canada and Mexico, number one and two trading partner for Iowa,” Reynolds says, “really important for our economy.”

There are still on-going talks among the three countries about President Trump’s tariffs on steel and aluminum, but there’s been a resolution to the thorny issue of Canada’s tariffs on dairy products.

“Our dairy farmers have been hurting so I think this is a positive step in the right direction,” Reynolds says.

Iowa Ag Secretary Mike Naig says Canada’s concessions on dairy tariffs appear to align with what Canada agreed to with other countries in the Trans Pacific Partnership.

“Both opportunity import US dairy products into Canada, but also dealing with some of the issues that we had with how Canada was supporting their export markets and their ability to put products on the ground cheaper than they otherwise would without that government support,” Naig says. “Details forthcoming, but it looks positive.”

Mexico announced in late August it had reached a tentative agreement with the United States. Naig says a big concern in farm country since then had been that Canada would be left out of an updated deal.

President Trump also revealed today that he’d be traveling to Iowa soon to make an important announcement. Sources tell Radio Iowa Trump will be in Council Bluffs October 9 and he’ll announce the EPA will allow the year-round sale of E15 — gasoline blended with a higher percentage of the corn-based additive. Governor Reynolds hopes to join Trump for the expected E15 announcement.

“I think this is great news for Iowa farmers,” Reynolds says.

Naig says the anticipated E15 announcement and the resolution of NAFTA should have a positive impact on corn and soybean prices.

“That’s what I’m looking at is: ‘Are we building certainty back into our markets?'” Naig says. “…Those are all positive things.”

Naig was appointed state ag secretary in March and he is seeking election this fall to a full, four-year term in the job. Reynolds became governor in May of last year and is also seeking election to the office for the first time.

“I applaud the Administration for positive news on the trade front, especially as it pertains to dairy exports to Canada…However, until we know that the tariffs both countries have imposed on our agricultural and manufactured products have been removed, we won’t be able to start getting our market share back from our competitors around the world,” Gannon said.