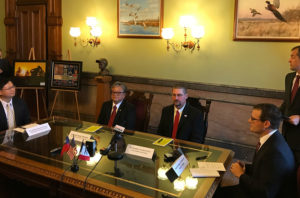 Preparing to sign the Taiwan soybean deal at the Iowa Statehouse.

Officials from Taiwan and the Iowa Soybean Association gathered in the Iowa Capitol today for a ceremony to celebrate Taiwan’s agreement to buy $1.5 billion worth of U.S. soybeans over the next 24 months.

“Today’s announcement by our Taiwanese trading partners to increase purchases of U.S. soybeans is welcome news,” said Iowa Soybean Association president-elect Tim Bardole of Rippey. “As an Iowa soybean farmer, I can say firsthand that we need some good news.”

This year’s U.S. soybean crop is projected to set a record.

“We’re good at growing soybeans and Iowa and U.S. farmers are also committed to ensuring that we’re a reliable supplier and that our soybeans are of the highest quality,” Bardole said. “Taiwan knows this, evident by their intent to increase imports of U.S. soybeans by 37 percent compared to last year.”

With this new agreement, Taiwanese officials say 90 percent of the soybeans they purchase will be grown in the United States.

“Of course I would like to thank the State of Iowa and the Iowa Soybean Association for their support,” an official from Taiwan said today during a ceremony in acting Lieutenant Governor Adam Gregg’s statehouse office.

The chairman of the Taiwan Vegetable Oil Manufacturers and the Iowa Soybean Association’s president-elect signed onto the “letter of intent” for Taiwan’s latest purchase of U.S. beans. Taiwanese officials formalized the deal in Washington, D.C. last Thursday.